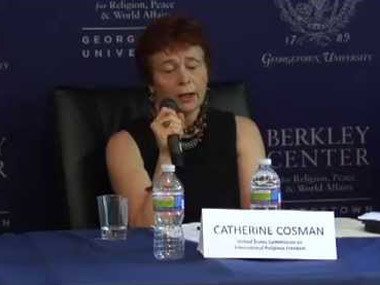 Despite the Azerbaijani government’s claims of official tolerance, religious freedom conditions in that country deteriorated over the past few years, said the USCIRF’s Senior Policy Analyst Catherine Cosman in the interview with the Azerbaijani news agency Turan.

"Unfortunately, the Azerbaijan government has shown that it has little tolerance – let alone respect -- for those who express diverse points of view; it only seems to tolerate those who support official policies and state authorities,” she stressed.

In spring 2014, Azerbaijan’s parliament adopted further restrictive amendments to the religion, purportedly to prevent the spread of religious extremism. In 2010, these fines were increased 16-fold, the expert notes. According to her Muslim communities in the country are under special control; all of their leaders are appointed by the state-controlled Board of Muslims.

The analyst reminded about the ban on wearing hijab (headscarf) at schools and 72 arrests that led to public protests in 2012.
According to Cosman residents of the Nakhichevan exclave encounter more severe religious freedom restrictions than in Azerbaijan’s other regions.

"The religious literature is also under sever control. Recently the works of Turkish theologian Said Nursi’s have also been banned,” she noted.

Catherine Cosman said that according to the Human Rights Center of Azerbaijan (HRCA), a non-governmental organization, has compiled a list of 220 Azeris convicted between 2005 and 2011 for alleged religious extremism. In January 2013, a rapporteur of the Parliamentary Assembly of the Council of Europe (PACE) issued his final human rights report on Azerbaijan including a list of political prisoners. Of these cases, 23 individuals have been convicted in Azerbaijan for alleged membership in Islamist groups, organizations and political parties. She noted that USCIRF had published a list of 51 religious prisoners in Azerbaijan sentenced since August 2011.

Answering to the question what is the risk of radicalizing of religious communities if they continue to be persecuted Cosman answered that Azerbaijani officials claim that religious movements are infiltrating Azerbaijan and are trying to create radical networks, independent analysts believe that it's the Azeri authorities exaggerate demonstrating the West that there is a real religious threat.The highly restrictive laws and other official policies adopted in recent years by the Azerbaijani government run the risk of radicalizing local religious and other communities much more than foreign influences.

According to her the Azerbaijani government has not found effective ways of dealing with that problem: laws should punish actual violence, not ideas or peaceful religious practice.

Speaking of Sunni-Shia tensions in Azerbaijan the expert notes that the misunderstanding between these two streams is due to generational change. The older generation grew up under official Soviet atheism and people of this generation may have encountered underground Islam but it did not understand Sunni and Shi’a Islam divergences. The younger generation, particularly those who studied in the Mideast, may have a better formal Muslim education and may give greater importance to distinction between Sunni and Shi’a Islam.

Cosman also found that the decision of closing the Gulen schools in Azerbaijan was an unfortunate one. "Gülen schools have trained hundreds of students in Azerbaijan and some graduates have taken up key positions in government, academia and the private sector. The experts note that the Gülen schools graduates are "well-educated and well-integrated in their society,” with good jobs and usually cosmopolitan in outlook,” the analyst noted and added that closure of those schools means that people will not be able to get better education.