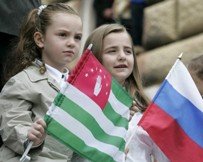 Russia and Abkhazia continue discussions of a draft treaty on alliance and integration. The document will stipulate formation of a common defense and security space and intensify cooperation in the economic and the social sectors. Alexander Karabayev, a politologist, deputy director of the Center for Studies of the Post-Soviet Space of the MSU IAC, has described the discussions and integration prospects in an interview with Vestnik Kavkaza.

- The draft treaty raised many questions, and even fears in Abkhazia, associated with independence problems. Are the threats visible in the document, or are they a completely different background?

- It is a mutual problem. The state of independence and sovereignty for Abkhazians is generally a new phenomenon; as a state, they have not succeeded yet, neither have they gained enough experience in the historical dimension, the short, by modern terms, period of practical socio-economic and political activities they had in the mid-1990s. Abkhazia has quite firm traditions of clan balances, and that is good, but it is the practically ineffective state management and administration that they lack so badly. Hence the squeamish attitude towards the subject is simply on the intonation level. Russia, however strange it may sound, in its turn, lacks enough experience of integrative interaction with small countries, in the zone of ethnic-territorial conflicts, that are under its full maintenance. I should point out the period from 1996 to March 2008, when Abkhazia was under pressure from various sanctions and restrictions by Russia. In other words, Moscow was considering Abkhaz sovereignty as a subject of disputes and trade with Tbilisi for quite a long period of time. This was left behind, but a certain disposition and stereotypes of those years remain. Many in Abkhazia play well with that.

We can say that Moscow and Sukhumi are trying to sense a strategy of cooperation by trial and error. Concerning the public reaction, it is generally different. There were honestly unprofessional, absolutely emotional statements. For example, as though the agreement says that Abkhazia loses its own army – such a statement was made, it is absolute nonsense. It may appear only if people commenting have read the agreement on a dark night or deliberately try to play with the feelings of the Abkhaz public. In the practical aspect, I see no violation of Abkhaz sovereignty. We are talking about the frames and rules that Russia offers for a legal formulation of the Abkhaz modernization program. Russia offers international-level institutional reforms. That is what is offered in the agreement, and that is what needs to be discussed, not some abstract fears.

- Does it meet the long-term interests of Abkhazia?

- It gives Abkhazia social development and modernization. We need to honestly admit: though Sukhumi has a certain volume of its own resources and certain potential for development, it cannot be on its own as an ordinary European country by definition. The fate of Abkhazia has developed in such a way that its modernization impulse, its vector of development may be realized only in two variants. They either form partnership relations with Georgia and start developing in a common rhythm, solving or not solving their ethnic political and separatist problems, in Georgia's interests. Or they develop within the framework of the Russian vector. The treaty sets the model for development within the framework of the Russian vector. It can conventionally be called a preamble for further intensification of bilateral actions. Russia needs it to strengthen the investments and budget injections it is making in Abkhazia. And Abkhazia can hardly expect additional budget assignations without the agreement. Our Russian tranches into Abkhazia were made in the budget of 2015-2017, taking into account the guarantees in the agreement. We are now talking about modernization of Abkhazia according to world standards. Healthcare, education, social support are offered development to meet Russian norms and standards. That alone is enough to understand the value and the importance of the document. On the conditional "world market” Abkhazia will find no better offers for its development. I just cannot see what country would take up its development in a sense that would more or less maintain the current level of sovereignty and independence that Sukhumi is so worried about.