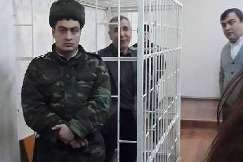 Preparatory meeting in the case of human rights defender Intigam Aliyev took place in the  Baku Serious Crimes Court chaired by Rasim Sadikhov. A lawyer Elton Guliyev on behalf of all the defense requested the termination of criminal proceedings due to insolvency of charges.

The essence of the charges is that Intigam Aliyev, receiving grants from foreign donors, did not register them, and was engaged in illegal business. Thus, the investigation incriminates Aliyev illegal use of 13 grants,  explaining it as an illegal execution of works and services.

However, seven grants refer to the period until 25 December 2009, when the law did not require registration of grants. As for the other six grants, the contract with them were presented to the Justice Ministry. Guliyev also pointed to the absence of symptoms in the "assignment" that provides for the assignment of "other people's property."

There are 29 payment orders, and the presence of "other payment orders" on which the accountant of the Legal Education Society, Gulshan Orujova, transferred money to the personal account of her sister Afsana Orujova in Unibank, then  the money were cashed and handed Aliyev. Both sisters were recognized as victims. However, on the payment orders there is no signature of  Aliyev, so the defense considers the evidence falsified.

Aliyev himself protested the court. "Animals are kept in cages. The European Court of Human Rights found the content of the defendants in a cage as humiliation of honor and dignity, Aliyev said, and asked to allow him to sit next to the lawyers. However, the prosecutor opposed, and the judge did not satisfy the request. Aliyev also claimed a violation of the rights of prisoners to confidential communication with lawyers. So, before the meeting, all the records are confiscated, including the application, and before bringing to the court  they are undressed  are searched.

In a car, designed for nine people,  are carried 12-13 prisoners. "There's not enough air,  people cannot stand or  turn," Aliyev said. "The arrest of Leyla Yunus, Khadija Ismayilova, Rasul Jafarov, Anar Mammadov, and me, is also the method of our struggle. Now, in practice, we suffer from the  the horrors of the prison system," said Aliyev. He stressed that his arrest was politically motivated. During a search in his office, were illegally seized documents and electronic media, but were not registered, and documents confirming shipment of grant contracts to the Justice Ministry for registration disappeared.

In addition, were confiscated all cases  on protecting the rights of citizens of Azerbaijan in the European Court of Human Rights, including the cases of electoral fraud, violation of freedom of the media, of torture.

Aliyev also pointed to the falsification of signatures on payment orders. "These are not my signatures. They are so obviously rigged, that the investigation does not risk to send them for examination," Aliyev said. Lawyer Elchin Sadigov filed a request for de-manufacturing charges of tax evasion. The cases noted tax evasion by 65,000 manat. However, he presented a document on  the payment  of 67,000 manat by the Legal Enlightenment Society.

After this, the prosecutor opposed the request for termination of criminal proceedings, but the court upheld it. Then, the protection asked for verification of bank accounts and property  of the accountant G.Orujova, who was recognized the victim.

According to the defense, G.Orujova worked in other organizations, and the need to investigate the origin of all funds received in this regard. The defense also asked for the request of the Ministry of Justice registry information on the registration of grants, excluding the testimony of persons recognized as victims, to replace the arrest to house arrest and others.

The victim G.Orujova opposed the request of her property and other bank accounts, saying that "transparent investigation" lasted for four months.

The other two victims, Sadiq Bagirov and Konul Bayramova, did not object to the defense motion.

* Intigam Aliyev was arrested on 8 August 2014 on charges of illegal business, tax evasion and abuse of office. Later he was also accused of embezzling and forgery. Aliyev denies all charges, and says they are politically motivated. International human rights organization Amnesty International recognized him as a "prisoner of conscience.”