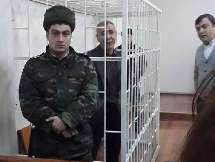 On Tuesday at the trial in the case of the head of the Legal Enlightenment Society (LES) Intigam Aliyev  victims gave testimonies.  The last spoke Gyulnar Mehdiyeva, a former lawyer of the NGO. According to investigators, in November-December 2010, a salarywas written on hername, while she did not worked in the organization. Mehdiyeva said that she  did not receive money, but  did not have any claims against the accused. Earlier, Aliyev repeatedly stressed that during the search  in the office of the LES were seized printing, letterheads, computers, and  the investigation falsified  the table of salaries.

Then the witnesses began to give testimonies. The head of the Association of Lawyers of Azerbaijan Annagi Hajibeyli said that participated in the projects of the  LES as an expert and receive fees, the amounts indicated in RFP documents. Similar statements  gave another lawyer, Yavar Shakhbazov.

Then  Intigam Aliyev’s daughter, Narmin Kamilsoy, gave testimonies. The judge Rasim Sadikhov said that has the right to refuse to testify in the case of her father, but Narmin noted that during the investigation she herself recalled  such a right, but the investigator  questioned her, noting the "importance" of this. The judge Sadyhov in this regard said that he does not insist on her testimony,  and the public prosecutor also said he had no question.

However, Intigam Aliyev said that he has a question for her daughter. "Narmin, you 23 years old, 20 year  of which you lived in the usual so-called  Khrushchev building in Sumgait. Over these years I have never taken you and your brother even for a week to have a rest. You studied in an ordinary school. I did not have time to deal with your education.

In spite of this,  thank to your efforts you entered the faculty  of law of the university. They will not allow you to study abroad under the state program. You will not get a job in government and commercial structures. You will not be taken to the Bar Association, because your father was not let there. You will have difficulties. Now tell me, do not you regret that you are  my daughter, do you consider yourself the victim? "asked Aliyev. In response Narmin said he was proud of her father.

At the previous meeting, the lawyer Shahla Humbatova presented notarized in Georgia screenshots (Azerbaijan notaries do not certify documents copied from the Internet), pages of the  Ministry of Justice of Azerbaijan, confirming registration grants  of Intigam Aliyev.

Lawyer petitioned to attach these documents to the case file. This petition  caught off the state prosecutor, who asked for time to study the petition. At the same time, he expressed doubts about the "authenticity" of the documents submitted, and offered to send a request to the Ministry of Justice whether the grants were registered?

In response, Aliyev said that the Ministry of Justice is an interested party, and did not give answer to similar requests  of protection, and the Ministry of Justice itself has withdrawn from its website information about the registration of grants. On the other hand, the implementation of projects without registration grants is only an administrative offense rather than a criminal act.

Aliyev proposed to request  from the Ministry of Justice  the book  on registration grants because it is difficult to falsify because of the large number of contracts. The judge left the petition of Aliyev unconsidered, and accepted the offer of a prosecutor to send a request to the Justice Ministry. The next meeting is scheduled for 14:00 on April 7.

** Intigam Aliyev was arrested on 8 August 2014 on charges of illegal business, tax evasion and abuse of office. Subsequently, he was also accused of embezzling and forgery. Amnesty International recognized him as a "prisoner of conscience.”