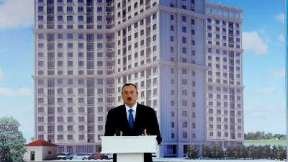 Non-governmental organization "Trade Union of Journalists of Azerbaijan” announced the results of a survey on social situation of journalists in 2015. The survey covered 50 media, characterized by stable activity and influence on public opinion. Among them are 25 republican dailies, five  news agencies,  five online portals, 10 weekly newspapers (7 regional and  3 republican),  five channels (3 regional and two republican.)

The survey covered  the following issues: monthly income of  media workers, the official registration of labor relations, the involvement in  health insurance, and the issues that concern  journalists most of all.

The report indicates that in  97%  of respondents sign labor contracts, but  in the best case,  an average of 60% of journalists sign  labor contracts. Labor  contracts are in most cases symbolic, and do not reflect the real wages and other issues. Medical insurance  is  on minimal level, and   were   formal signed only in two  editorial offices.

The situation is  sad. According to Turan, no more than 40% of journalists have labor contracts with editorial offices. Often,  only editor,  his deputy and  accountant are formally registered.

That is, in the majority of media the  activities and relationships are formed in the offices outside the law, moreover with a gross violation of the law. Salaries of the remaining 60% are issued without proper clearance, without deduction of tax. The wages noted by the Trade Union of Journalists of Azerbaijan  only  by half consist of the official part, and the other half is given in the "envelopes".

To date, revenues of print and online media are formed from:

3. Media Support Fund under the President

1. Retail selling does not bring any income.  Only from 20- to 300  copies of daily newspapers are sold per day through a retail network. The exceptions are the newspapers Azadlig and Yeni Musavat, which sell a couple thousand copies a day; official and openly pro-government newspaper, which the budget and controlled power structure are forced to buy also sell a day from a few thousand to 18,000 copies. Newspapers are sold at a price of 0.40 manat, from which the editorial office get only 0.20 AZN.

2. Advertising market  has been monopolized, as well as the media, and is also controlled. Advertise on independent and opposition media  is tacitly prohibited. Advertising often  is used as legal support for the media ( by informal founder), and to support all the loyal media.  The Press Council admits that  advertising  on online  and print media ranges  within 6-9 million a year. In general, the annual media advertising market is about 80 million manat, of which about 65 million manat falls on television and radio. On the parameters of the population and GDP Azerbaijan  is by 10 times  behind the standard volume of the advertising market in European countries.

3. State Fund for Media Support under the President of Azerbaijan, with a budget of about three  million manat is a major contributor to the print media. More than 30 newspapers receive grants  on its line, and assistance from 20 to 120 thousand manat per year. This is significantly higher than the newspapers  get from sales. In fact, the fund acts as a donor for open media, making them overly dependent on the state. According to the regulations of the Fund, its mission is the creation of economic conditions for the development of the media and ensuring their independence. But for the entire time of activity since 2009, the Fund did not present the public this concept, what it cannot do within the policy of destruction of media independence. President twice approved  the Board of the Fund during its creation in 2009, and re-election of the Board in 2013, which indicates its support for such activity. The Fund ensures the project, supported by the president, on providing  journalists with apartments.  Such a building was commissioned in 2013 on the eve of the presidential election, and the next similar house will be given to journalists on the eve of parliamentary elections this year.

4. Illegal financing of the media  is that underwater part of the iceberg, which is invisible, and hard available for viewing. But just it is the economic basis of the media. Illegal financing of the media by the government in the face of the oligarchs can vary between 20 million manat. This is evidenced by the difference between formal and informal wages of ordinary employees and thousands of handouts for the  heads of  media.  Such funding has been used since the beginning of the period of "Big Oil", the first half of the 2000s.

Summarizing a survey of Trade Union of Journalists of Azerbaijan  it can be concluded that the media  dependence on the state has increased,  and  the wage growth  is not due to an improvement in economic conditions, but due to illegal injections. How  there could be a rise in wages, if in  2014 was banned selling newspapers on the streets and in the subway, and the number of newsstands  is  seriously behind international standards.  The Press Council  admitted in 2014  that media advertising market also tended to decrease. Now, when Azerbaijan is entering  a period of crisis in connection with the global trends, we can confidently predict an even greater  dependence of  media on the power, because it is the only source of comfortable existence of Azerbaijani journalists.