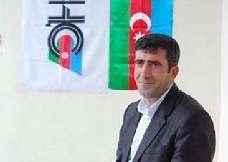 The head of the Sheki district organization of PFPA Rauf Abdurahmanly was subjected to administrative arrest for 20 days on January 29, the regional correspondent of Turan reported. The law enforcement agencies did not report the reasons for the arrest of the activist.

In PFPA they believe that Abdurahmanly was arrested in connection with putting up posters with portraits of the imprisoned journalists Khadija Ismayilova and Seymour Hazi, as well as two local activists previously arrested for 30 days, in the town.

Recall that a member of the Supreme Majlis of the Azerbaijan Popular Front Party from the Sheki region, Ali Abdullayev, and the deputy chairman of the regional organization of the party, Mubariz Abdulkerimov were arrested on Jan. 16 for 30 days on charges of not subordinating the police.

PFPA is convinced that the true reason for the arrest of the two activists was their putting posters with the slogan: "Free Khadija!" in Azerbaijani and English at bus stops and on buildings in Sheki on January 14.

Rauf Abdurahmanly was also detained then, but a few hours later he was released.