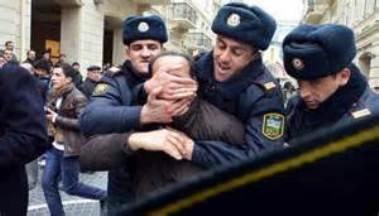 Member of the Supreme Majlis of the Sheki  branch of  the Azerbaijan Popular Front, Ali Abdullayev was  arrested last month on charges of hooliganism and disobeying police.

On the same charges  is expected sentencing deputy chairman of the regional organization of the party, Mubariz Abdulkerimov.

According to  local sources, the real reason for the arrest of the two activists became the   fact that they posted  on January 14 in Sheki  at bus stops and buildings slogans: "Free Khadija!" in Azerbaijani and English languages.

On January 15  was arrested Abdulkerimov, who was summoned to police by  the police officer Khazar.

Other activists came to the district department to find out the reasons for the detention of comrade, but they were told nothing.  Late at night, Police Major Vugar Khalilov spoke insultingly about Khadija Ismailova, and condemned  the activists putting up posters in  her support. In response Abdullayev spoke negatively about those who imprisoned Ismaylova,  and after  that he was detained.

Both prisoners refused  state lawyers.  Their arrest will be appealed.

Note that the day before was arrested  another activist, Abdurahmanly Rauf, who was later released.

Detained On January 15, deputy chairman of the Sheki local district organization of PFPA Ali Abdullayev and member of the Supreme Majlis of PFPA, Mubariz Abdulkerimov, were delivered to the district court today. Another activist, Rauf Abdulrahmanli was released.

He said that Abdullayev is prosecuted under Article 310 (non-subordination to police) and Abdulkerimov - under Article 296 (disorderly conduct).

In fact, the activists were detained for they pasted posters with photos and a slogan: "Free Khadija!" in the Azerbaijani and English languages at bus stops two days ago. -03B-

The night before, activists of the Popular Front Party Ali Abdullayev and Mubariz Abdulkerimov were arrested in Sheki. Another activist Rauf Abdurahmanov was called to the police.

As the regional correspondent of Turan reported, the activists were detained in connection with putting posters with slogans "Freedom to Khadija Ismailova" in Sheki two days ago.

It is expected that the activists will be brought to administrative responsibility.