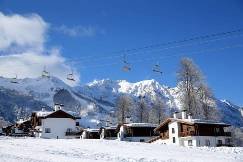 Six months after the Olympic caravan slid out of Sochi, depressingly familiar photographs suggested that the skiing venues had already become ghost towns. But now, a further six months since the lights went out on the most expensive Winter Games of all time, new reports paint a more positive picture of mountains in demand.

Snow helps – many Alpine resorts are dead out of season – but a domestic interest in skiing in the tracks of Olympic heroes has also combined with politics and cold economics to keep the lifts busy near Krasnya Polyana, the down-at-heel village that became the base for the snow disciplines last February.

Boomtime in the western Caucasus is a glimmer of good news for Vladimir Putin, for whom Olympic pomp must feel like a happy memory. Since his pet project went off with only a malfunctional ceremonial snowflake to cause him grief, Vlad has dealt with the Ukraine conflict, cooling relations with the West, and a rouble sliding downhill fast.

But these rocks on the piste of Putin's presidency are good for mountain tourism. This time last year, you could get 45 roubles for a euro. Now it's 75. Great for Brits heading east (our own Simon Calder reported last month that you could fly to Moscow and back for as little as £50) but a disaster for an increasingly grounded Russian jetset. For years it has established bases in the glitzier corners of the Alps, but now many are staying at home.

"Usually we go to Austria or Italy, but this year we decided this will be our answer to sanctions," Maxim Zdor, 37, told The Post, echoing another motivation of short-haul Russian skiers (the sanctions being the EU's response to Moscow's involvement in Ukraine). "Putin told us that it's better for us to support Russia and Russian resorts like Sochi," another skier added.

You would think, then, that an Olympic-level resort that suddenly looks pretty cheap would be an attractive proposition for some of the almost million Brits who ski each winter. But is it? I went there, almost four years ago now, to get a sense of the place. To be fair to Rosa Khutor, the resort that hosted the downhill event, it was a building site, its muddy car park at odds with the gleaming gondola lift imported from Austria.

Accommodation was worse. In a nearby "spa" hotel, I was served greasy oven chips and frankfurters so hard that they might have been used as piles in the resort's construction. And that was just breakfast. At the nose-wrinkling basement pool, air from the apparently well-used loos hung heavily over the water.

And yet, despite being hungrier than I can remember during my four-day visit, the skiing was great. The pistes at Rosa Khutor are wide and sweeping, descending 1,700m (5,600ft) from Rosa Peak. The off-piste is more tantalising still, putting the resort on the professional Freeride World Tour, which I had gone to write about. And now the cranes have gone and, I gather, several excellent hotels surround the mud-free car park.

Many British tour operators spied a potential new market, but among the big guns only Crystal put Sochi on its books. "Everyone's talking about it – so get out there and ski it, it's a phenomenal resort," its website says. But last winter, Crystal says it took "only a few" British skiers to Russia, with no increase in demand this year. "We haven't seen the rise we hoped for after the Olympics," a spokesman adds.

James Cove, the editor of the PlanetSki website, points out that tricky visas and circuitous journeys are off-putting (I flew via Istanbul, arriving in Sochi at 3am). Meanwhile, the political if not economic factors boosting domestic tourism are also keeping foreign visitors away across Russia.

If Russians keep going, Rosa Khutor and the other Sochi resorts may survive until some future time when it's neither politically nor logistically difficult for foreign skiers to join them. Meanwhile, Cove says snow seekers looking east can get even better value in Jasna in Slovakia. "I was there last week and paid £1.15 for a large beer," he says. Can't argue with that.