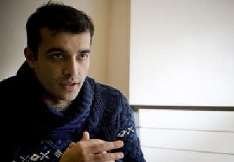 On the trial of the human rights activist Rasul Jafarov in the Baku Court of Grave Crimes the testimony of witnesses continued today.

The investigative journalist Shahvalad Chobanoglu noted that unjustified prosecution is a crime against Jafarov.

"If Rasul pocketed the money, the easiest way to do it was through me.

I moderated a discussion of a documentary as part of a project and received 100 manat. If Rasul was engaged in fraud, he could write even 1,000 manat for me," he said.

"It is symbolic that the film was about the Khmer Rouge – the Cambodia bloody dictatorship, where human right defenders such as Rasul Jafarov were chased," continued the reporter.

A member of the court Javid Huseynov asked the journalist about his knowledge and experience in the field of cinematography.

Chobanoglu explained that his role was to provide information to the audience about the situation in Cambodia, essentially crimes of the Khmer Rouge and discussions after watching.

The judge Huseynov asked whether the film was shot in Azerbaijan, which caused laughter in the hall.

He witness Hamid Mutallimov, a member of the Committee to Protect Oil Workers Rights reported that the youth activist Ulvi Hasanli asked him to sign a document about getting 300 manat, as he himself had no taxpayer identification number.

Mutallimov signed it and got 36 manat for the tax.

Hasanli himself said he gave the said amount to another participant of the project, which did not have a taxpayer identification number.

The accountant Tatyana Kryuchkina involved in the project funded by NED said that all financial records were kept in accordance with the law.

Presiding Judge Eldar Ismailov asked the presence of an office at Rasul Jafarov. To this Jafarov replied the project did not include office rent and he used the room as part of another project.

The witness Ali Novruzov also said that he received 100 manat for the project, which was formalized.

Further, as a witness spoke the lawyer Elchin Sadygov, saying that in 2006 he established the Association of Legal Defense and Education. After the election as a member of the Bar, he has not operated the NGO and 5 times paid a penalty for not providing tax reporting of inactivity.

In early 2014, at the request of Rasul Jafarov he gave the NGO to his management.

Jafarov received two grants from donors. However, the Ministry of Justice refused to approve the election of Jafarov as the Chairman of the Board of the NGO and further its activities were suspended.

The judge Ismayilov announced that the witnesses for the prosecution ended their speeches today. There are still four witnesses.

The next meeting is scheduled for March 12.

The lawyer Agababa Rzayev, commenting on the results of the meeting, said that all the 9 prosecution witnesses have testified in favor of Rasul Jafarov. They were attracted to invent evidence against Jafarov. However, their performance is just evidence to the contrary, the lawyer said.

He recalled that the victims also had no claims to Jafarov.

* Jafarov was arrested on 2 August 2014 on charges of illegal business, tax evasion and abuse of office. Subsequently, he was charged with misappropriation and official forgery. He denies all the charges and connects them with his human rights activities. Amnesty International has recognized him "prisoner of conscience".