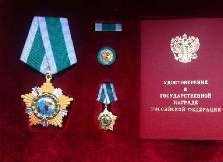 Yesterday the Russian President honored the speaker of the Azerbaijani Parliament Oktay Asadov and assistant to the President of Azerbaijan, Ali Hasanov with orders of Friendship.

Commenting on the awarding for the agency Turan, the head of the National Council Jamil Hasanli said that this is the result of the Azerbaijani-Russian rapprochement in recent years.

These people have played an important role in this and in many ways and they have adopted the practice of the Russian legislation.

"It is also an indication that Baku is turning away from the West and moving closer to Russia," said Hasanli.

The head of the Civil Solidarity Party Sabir Rustamkhanli believes that the practice of awarding the leaders of other countries has existed for a long time and is aimed at strengthening friendly relations. According to him, in this regard, there should not be any kind of "black thoughts".

The political scientist Arastun Orujlu believes that Asadov and Hasanov have always been loyal to Russia. In particular Asadov repeatedly criticized and berated the West in Parliament. At the same time, he blocks every possible criticism of Russia. These achievements did not go unnoticed, said Orujlu.

The former leader of Musavat and now head of the analytical center Isa Gambar said these awards mean that Russia is preparing for the period "after Ramiz Mehdiyev."