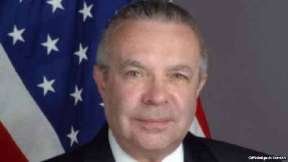 Richard E. Hoagland, Principal Deputy Assistant Secretary, Bureau of South and Central Asian Affairs said at the 5th Annual Turkic American Convention that the US attaches great importance to developing trade links along the route of the ancient Silk Road. "The United States shares this vision. The strengthening of east-west trade is a key component of our New Silk Road initiative, which is also expanding complementary north-south trade between Central and South Asia.

For those of you not familiar with the New Silk Road initiative, it is our long-term strategy to make Central Asia, including Afghanistan, once again a crossroads of global commerce. Unfortunately, Central Asia remains one of the least economically integrated regions in the world with only six percent of total trade occurring within the region.

But thanks in part to our New Silk Road initiative, progress is happening. Since 2009, intraregional trade in Central Asia has increased by 49 percent, and since 2011 the cost of moving goods across regional borders has decreased by 15 percent.

That’s good, but still much remains to be done. And, if you’ll allow me, I’d like to explain briefly how the New Silk Road initiative works, in both theory and practice.

The initiative is built on four pillars, the first of which is building a regional energy network. This region is awash in energy resources, yet some countries regularly have power shortages. Moving surpluses from one country to plug deficits in another will increase economic activity, and create new opportunities for people on both sides of the equation. In addition to the several gas and oil pipelines in the works, we are supporting efforts through the World Bank on the CASA-1000 project, which during the summer months will sell excess hydroelectricity from Tajikistan and the Kyrgyz Republic to Pakistan and Afghanistan.

The initiative’s second pillar is improving trade and transport links. With more roads and rails and ports, transport costs will decrease while volumes increase. Through the Asian Development Bank, we are supporting the Central Asia Regional Economic Cooperation program, which aims to build or improve nearly 7,800 kilometers of road and 3,800 kilometers of rail lines by 2020, including a route connecting Turkmenistan, Afghanistan, and Tajikistan.

The third pillar is streamlining customs and border procedures. When goods can get to markets faster and cheaper, producers make more, retailers sell more, and consumers pay less. This past January, Afghanistan, Pakistan, and Tajikistan made progress toward removing barriers that slow the movement of goods across their borders. We’re also encouraging Kazakhstan, Azerbaijan, Georgia, and Turkey to move forward on the Silk Wind Intergovernmental Agreement, which will help standardize transport costs and decrease delays.

The initiative’s fourth pillar is creating new business-to-business and people-to-people ties to leverage the work done under the first three pillars. We haveorganized trade delegations and conferences in Almaty, Islamabad, Kabul, Mazar-i-Sharif, and Termez that have resulted in over $15 million in trade deals. This is just the beginning – a drop in the bucket, if you will. As the barriers to commerce come down, the incentives to trade go up. And groups like yours are key to making the connections among businesses and people that will drive economic growth across the region.

Others see the same potential in the region that we do: by using overland routes, China’s ambitious Silk Road Economic Belt will reportedly cut transit times from Western China to Germany from 44 days to 14. Turkey, Azerbaijan, and Turkmenistan recently met in Ashgabat to move forward on the Lapis Lazuli Corridor, which would run through Afghanistan and Turkmenistan, across the Caspian to Georgia, and on to Turkey and Europe. Already, Kazakhstan’s and Turkmenistan’s expansion of port facilities is mirrored across the Caspian in Azerbaijan. In the not-too-distant future, a train-car ferry system can move Central Asian goods from Aktau and Turkmenbashi to Azerbaijan, then link to a rail line in Georgia before connecting to the Turkish network and moving on to Europe.

And Europe is also spearheading efforts to better connect it to Central Asia. As the chair of the EU presidency, Latvia has made ties between the EU and Central Asia a top priority – and they are bearing fruit, literally. When I traveled to Riga last month for consultations on this topic, I learned that Uzbekistan has built a cold-storage warehouse there to sell fruit and vegetables to Europe. I couldn’t help but recall an occasion when I was a young Foreign Service Officer in Tashkent and learned, to my astonishment, that the Thompson Seedless Grapes we all buy in supermarkets here actually originated in the heartland of Uzbekistan when a botanist took back cultivars to the Central Valley of California at the beginning of the 20th century.

Allow me to turn for a moment to Russia’s role in Central Asia. Obviously, what Russia is doing in Ukraine is cause for concern for the countries of Central Asia. And Russian propaganda blanketing the region is presenting a skewed and anti-American/anti-European interpretation of events. We recognize that the countries of Central Asia have close political, economic, security, and people-to-people ties with Russia. But we also maintain that no country has the right to unilaterally determine the political and economic orientation of another country. So we support the countries of the region in upholding their independence and territorial sovereignty, and we believe these core interests will be strengthened through the expansion of commerce in the ways that I outlined above.

These are exciting times – I have not seen such potential for change in Central Asia since my days there as a young diplomat immediately following the collapse of the Soviet Union. But positive change will require political will at the top in each country. Without political will for cooperation, there will be little progress. Now as then, the United States will remain committed to opening the doors to greater economic opportunity and democratic progress in the region. We are grateful to have the support of organizations like the Turkic-American Alliance,” Hoagland said.