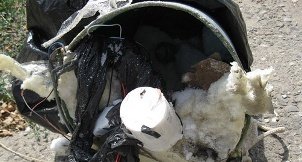 In the course of the special operation carried out in the Dagestani village of Novy Paraul, law enforcers found a workshop arranged for making improvised explosive devices (IEDs) and more than 140 kg of explosive substances.

The "Caucasian Knot" has reported that on Friday morning, the counterterrorist operation (CTO) regime was introduced in the Karabudakhkent District. According to the National Antiterrorist Committee (NAC), two members of the armed underground were killed in Novy Paraul. Meanwhile, earlier, a source in the law enforcement bodies reported on three killed men.

The law enforcers found a fortified bunker under the house, which sheltered the killed men. According to the law enforcers, the room arranged as a workshop was used to make IEDs. At the place of the special operation, they found six bombs, 140 kg of ammonium nitrate, about 3 kg of plastic-based explosives and a bag of aluminium powder. Besides, the law enforcers found eight grenades, items from a grenade launcher, forearms and about 6000 rounds of ammunition, the RIA "Novosti" reports with reference to the NAC.

The number of the discovered firearms also included an Austrian Glock pistol; according to the operative information, a weapon of such model belonged to Arsanali Kambulatov, the leader of the Makhachkala sector of the armed underground. However, the killed men have not been identified yet, and it is not clear whether Arsanali Kambulatov was among the killed militants, the "Interfax" reports with reference to a source in the law enforcement bodies.