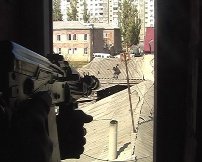 During the week from April 27 to May 3, 2015, the armed conflict in Northern Caucasus claimed at least two human lives; and no data about wounded persons was reported. These are the results of the calculations run by the "Caucasian Knot" based on its own materials and information from other open sources.

Both casualties were suspected of involvement in the armed underground in Dagestan.

According to a law enforcement source, on April 27, in the outskirt of the village of Oktyabrskoe in the Khasavyurt District, Khasmagomed Charinov (according to other sources – Charanov) got into an ambush and was killed while rendering resistance. According to power agents, in the Khasavyurt District he was the militant leader of the northern sector of the "Imarat Kavkaz", a grouping recognized as a terrorist one; however, some time ago he took an oath to the "Islamic State". A submachine gun was found on him; and later, when his house was searched, power agents found weapons, ammunition and a bomb, which detonated, when they tried to neutralize it. There are no victims or wounded ones among law enforcers.

In the morning on April 28, in a flower bed at the intersection of Shogentsukov Avenue and Parkovaya Street in Nalchik a plastic bag was found with an improvised explosive device (IED) in it. Because of the danger of transporting it, explosive experts decided to blow it up on the spot.

On May 2, in Malaguseinov Street in Kizilyurt, when his documents were inspected, an unidentified man triggered an explosive device. The blast killed him, but did not hurt any of the policemen. The casualty was identified as Shamil Abdulkhalikov, who was wanted for the murders of a retired colonel of the Ministry of Internal Affairs (MIA) and religious figures.

On April 27, employees of the Vedeno ROVD (District Interior Division) of Chechnya detained, in the village of Selmentauzen, a local resident suspected of aiding members of illegal armed formations (IAFs). According to operative data, in spring of 2006, the 38-year-old man supplied foodstuffs to IAF members acting in the Vedeno District. During the interrogation, the detainee confessed that he had helped militants for some time. He is under recognizance not to leave.