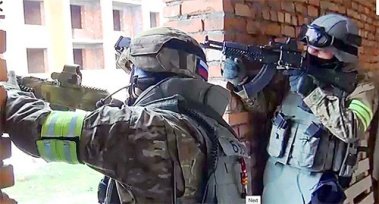 Khasmagomed Charanov, who was killed in Dagestan by power agents, used to be, according to their information, the leader of "Aukh" militant grouping. He was wanted in connection with the attacks on law enforcers and extortion of money from businessmen.

The "Caucasian Knot" has reported that Khasmagomed Charanov was ambushed on the outskirts of the village of Oktyabrsky in the Khasavyurt District and killed while he rendered armed resistance.

Khasmagomed Charanov was on the federal wanted list on suspicion of involvement in plotting and committing of a number of crimes, including numerous armed attacks on law enforcers and extortion of large amounts of money from businessmen, the website of the National Antiterrorist Committee (NAC) reports on April 27.

In the end of last year, Khasmagomed Charanov together with Islam Muradov, the Amir of the Khasavyurt Jamaat, took the oath of allegiance to Abu Bakr al-Baghdadi, the Caliph of the "Islamic State" (IS), the newspaper "Kommersant" reports in its article of April 27 with reference to a source from the law enforcement bodies.