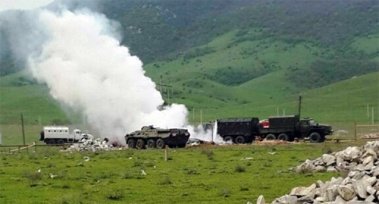 The man was ambushed at the exit of his dugout on the outskirts of the village of Oktyabrsky in the Khasavyurt District. According to a source from the law enforcement bodies of Dagestan, the man rendered armed resistance and was killed.

According to the source in the Khasavyurt District, Khasmagomed Charinov was the leader of militants of the northern sector of the terrorist grouping "Imarat Kavkaz"; however, recently, he swore allegiance to the "Islamic State", the "Interfax" reports.

"As a result, the house was partially destroyed," said a source in the law enforcement bodies of Dagestan as quoted by the "Chernovik" (Draft) newspaper. According to the source, no law enforcer suffered in the incident.