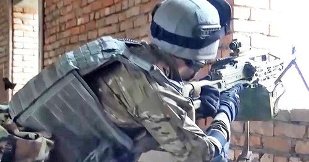 The active phase of the special operation in Makhachkala is over: three suspected militants have been killed.

The "Caucasian Knot" has reported that within the special operation, a multi-storey apartment house was blocked. According to preliminary data of power agents, the members of the so-called "Makhachkala" grouping Zaur Begov, Abumuslim Gasanov and Mirzabek Idrisov were hiding there.

During the storming of the house the above three militants were shot dead, the "Interfax" reports, citing a source from law enforcement bodies of Dagestan.

Two of those three were on the federal wanted list. Law enforcers believe that they were directly involved in a number of armed assaults, robberies, extortions, as well as explosions and armed attacks, including the shelling of road-and-patrol service (RPS) unit in September 2013, the attack on the patrol-and-post service (PPS) post in Makhachkala, and shelling from a grenade launcher of the building of the Centre to Combat Extremism in August 2014.

Besides, in 2014, they participated in the killing of a gas station owner, who refused to pay tribute to militants, and his son; and in March 2015 – in the attempt on the deputy head of the Karabudakhkent ROVD (District Interior Division), the TASS reports with reference to the Russian National Antiterrorist Committee (NAC).