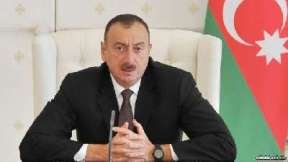 BRUSSELS -- EU lawmakers have called on Azerbaijan to release individuals widely seen as political prisoners ahead of the inaugural European Games and urged European leaders to skip the event’s June 12 opening ceremony in Baku.

European Parliament Vice President Alexander Graf Lambsdorff said on May 12 that the Azerbaijani government "should fully grant its citizens all the freedoms that are laid down in the European Convention on Human Rights, which it adheres to,” and in line with the UN’s Universal Declaration of Human Rights and the Olympic Charter.

Lambsdorff spoke at a European Parliament event titled Baku Games: Run For Human Rights, hosted by all of the chamber’s main political parties.

The European Parliament is likely to vote on a resolution on the human rights situation in Azerbaijan in June, and several members of the chamber plan to write to the Azerbaijani government in the coming weeks calling for the release of jailed journalists and others whom rights activists consider political prisoners.

The lawmakers say they hope President Ilham Aliyev will pardon these individuals on the occasion of Azerbaijan’s Independence Day celebrations on May 28.

Azerbaijan’s record on civil society and media freedoms has faced increasing international scrutiny in the run-up to the European Games, an Olympics-style event limited to athletes from Europe that is set to be held in June in Baku.

The games will bring some 6,000 athletes from 50 European nations to the Azerbaijani capital for two weeks.

Giorgi Gogia, a senior South Caucasus researcher for the New York-based Human Rights Watch, told the event that numerous individuals he has worked with in Azerbaijan over the past 15 years are either in jail, in hiding, or have fled abroad.

He noted that the Azerbaijani government has tightened restrictions on nongovernmental organizations.

"The space for civil society is really gone in the country,” Gogia said.

Baku has repeatedly rebuffed accusations by Western officials and international rights groups that it is stifling dissent and jailing people for their political beliefs.

Dinara Yunus, daughter of the Azerbaijani human rights activist Leyla Yunus and historian Arif Yunus -- both of whom were jailed in 2014 -- told the event that her mother is suffering from both hepatitis C and diabetes, has lost 16 kilograms during her incarceration and is slowly going blind.

She added that she has not heard anything from her father since his arrest last year.

"I don't know anything about my dad since August 5,” Yunus said. "He is just buried alive.”

She described Western nations’ approach to Baku’s rights record as "silent diplomacy” that is doing little to improve the situation in Azerbaijan.

"So far I don't see any improvements. I am losing hope to see [my parents] alive,” Yunus said. "It is not about now only calling for their freedom, it is calling for saving their lives. They need hospitalization abroad; they need medical treatments.”