US reacts to closure of OSCE office in Azerbaijan: "Deeply disappointing, no other way to put it." 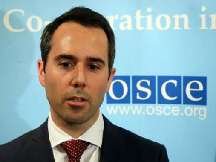 Washington is disappointed by the news about Azerbaijan's intention to end the OSCE’s presence in the country and encourages Baku to reconsider its decision, TURAN's U.S. correspondent reports.

"Last Friday we learned from the Secretary General that Azerbaijan had declared its intention to revoke its signature to the MoU (Memorandum of Understanding), which contains a number of practical arrangements that pertain to the OSCE Project Coordinator’s Office day to day function in Baku. This is deeply disappointing, there’s no other way to put it," he said.

The mandate clearly runs through the end of 2015 and, moreover, the participating States saw fit to signal their expectation that this was only an initial term, to be followed by continuation of the mandate passed 2015.

"One of the ways in which governments demonstrate their commitment to improving the comprehensive security that their citizens enjoy is through direct engagement with the OSCE. OSCE field presences have worked with citizens and governments of many States of the OSCE area to boost efforts at reform, and at continuous improvement of implementation of OSCE commitments."

For Ambassador Baer, it is no accident that some of the governments that are widely seen as most committed to pursuing reforms that would strengthen security, rule of law, anti-corruption, and human rights, are the same governments that have the strongest working relationships with their local OSCE presences, and with the independent institutions of the OSCE.

The OSCE’s office in Baku was downgraded two years ago, just months ahead of the presidential election, and its activities today focus on human trafficking, gender equality, and governance.

In his speech, Amb. Baer added that the OSCE Project Coordinator’s Office in Azerbaijan has the potential to do valuable work that will help the local government improve its implementation of OSCE commitments in all three dimensions.

"The office should continue to operate, and we call on the Secretariat to dispatch a temporary Head of Office until a new permanent Project Coordinator has been appointed," he said.

In the meanwhile, he added, "we encourage the government of Azerbaijan to reconsider its declared intent to revoke its signature on the MoU."

"Alternatively, if a new MoU is put in place, this should be done quickly and the new MoU should address some of the shortcomings of the current one, strengthening the PCU’s ability to act. Notwithstanding the discussions about MoUs, we of course continue to look to the government of Azerbaijan to ensure that all OSCE personnel, property, and office space are free from harm or harassment," he said.

Baer also pointed out that the early public reaction to the news that Azerbaijan wants to terminate the MoU because it would like to shut down the OSCE Project Coordinator’s Office, has been "both predictable and regrettable."  "Observers see the Azerbaijan government’s move in the context of a broader crackdown and as part of Azerbaijan’s significant backsliding in meeting international commitments and obligations, including with respect to human rights and fundamental freedoms. This is not good for the OSCE; this is not good for comprehensive security in the region; this is not good for the people or the government of Azerbaijan," he said.

"We hope that the government of Azerbaijan will work with the other 56 participating States to find a way forward that is consistent with advancing implementation of OSCE commitments and our shared security," he added.