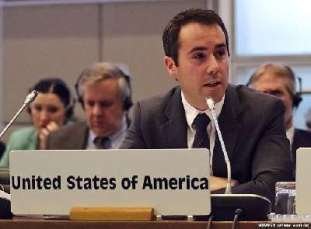 Washington remains concerned about the deteriorating situation for civil society in Azerbaijan, including journalists and media outlets, US Ambassador Daniel Baer, US Representative to the OSCE, noted in his recent statement delivered to the organization's Permanent Council.

"We urge Azerbaijan to adhere to its commitments and to respect the rights of individuals, including those working for media outlets, to express their views freely and without fear of reprisal," Ambassador noted, TURAN's Washington correspondent reports.

Recent press releases from the OSCE Representative on Freedom of the Media also outlined actions taken by the Azerbaijani authorities that appeared intended to interfere with independent media and punish critical voices.

As of December, local NGOs considered at least 12 journalists and bloggers to be political prisoners or detainees, including well-known journalist Khadija Ismayilova, according to Ambassador Baer.