Kerimov: To save South Dagestan from Baku expansion 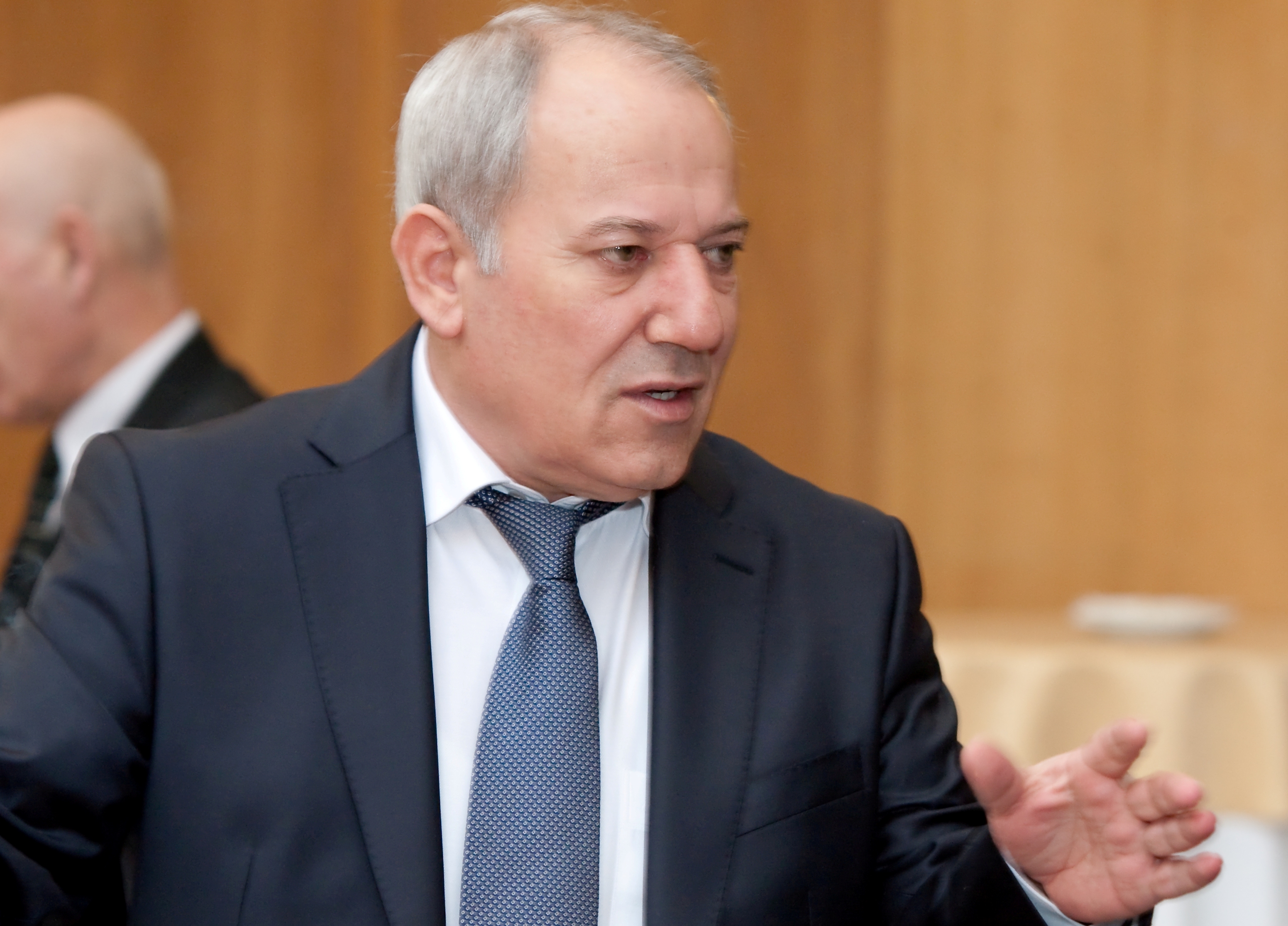 The last events showed the whole world the catastrophic reality concerning that the South part of Dagestan is almost fully ruled by Baku, not by Moscow and Makhachkala. This situation already threatens not only keeping lezghins as a people, but also national safety of Russia.

Making concessions Baku soon Russia can lose its valuable status of sovereign power which is able to protect its borders and to keep its territorial integrity. Today we have a talk about the scale and reasons of this catastrophe and how to resist these threats with FLNCA President Arif Kerimov.

How will you explain the events taking place in Dagestan in connection with the renaming of the central street in Derbent?

The population is displeased with it and this displeasure becomes stronger. And this is not strange. Most of the people know who Haydar Aliyev is and how harmful he was for lezghins and other peoples of Dagestan. During his ruling lezghins have seen nothing good, only felt discrimination from the side of authorities of all levels. And the situation is the same now, under the ruling of his son.

Besides, Baku has always announced about its claims on Derbent and on South Dagestan. It has been happening from the time of the Soviet Union. The last events show that the authority of Azerbaijan and Azerbaijan social organizations absolutely openly say that this region is the territory of Azerbaijan. The authority of Dagestan and Russia don’t react to their unceremonious claims.

The provocative speeches of the head of the Federal National and Cultural Autonomy "Azerros” are especially disgraceful. Let me remind that the member of the union of elders of "Azerros” Rustam Arifdjanov has said that Derbent is Azerbaijani city as it was founded by Azerbaijanis.

And the head of "Azerros” Abbas Abbasov mentioned that "Derbent used to be a part of Azerbaijan once”. These claims are false from the beginning till the end; they make interethnic disagreement and give a cause for attempt upon the territorial integrity of Russia. Abbas Abbasov has been the first deputy of Prime minister of the Republic of Azerbaijan for 14 years and was the right hand of Haydar Aliyev.

Lezghins are not going to suffer such actions from the side of Azerbaijanis any more. Now all over Russia we can see the rise of self-consciousness of Lezghins. The people begin to use its constitutional right for expressing the protest by mass-meetings and pickets.

Forthcoming action of all Russia on the 29th of June is the indicator of national indignation which encloses not only Lezghins but also the representatives of other peoples of our country. The main aim of our action is the abolition of the renaming of the street in Derbent.

Will you take part in the meeting?

Yes, of course, I will take an active part in the meeting. And if the organizers give me chance to say a word I will definitely use the possibility to tell about the infringement of the constitutional rights of my people.

But we always hear about the friendly relations between Russia and Azerbaijan. It is said by high-ranking officials.

The activity of many of these officials should be checked by the suitable services. It turns out that they are foreign agents and close their eyes and don’t see the actions against Russia done by Baku, and besides they don’t pay attention on the discrimination of our compatriots in the Republic of Azerbaijan.

Let me remind that Azerbaijan has raised the cost of rent of Gabala RS for 40 times and after that Russia refused of it; such event can’t strengthen the intergovernmental relations between these two countries.

Azerbaijan is on the side of the USA, Turkey and Israel. Military and economical cooperation with these countries are harmful for Russia. But we still continue calling Azerbaijan a friendly country. But what a friendship it is!

In Azerbaijan the cultural-historic heritage of Lezghins is destroyed. The famous Lezghi mosque of 12th century situated in Baku in Old city was renamed to Ashurbekov mosque. Everything is done in order not to sound the name of Lezghins on ancient monuments, in order to delete the historical memory of Lezghins.

The indigenous people are pressed out. In Khrakh Uba (Russian village in the territory of Azerbaijan) the school was closed and blocked by police and the children couldn’t even celebrate "The day of knowledge” on the 1st of September, and the parents and teachers got threats!

In which country is it possible such an arbitrariness? All this time the village itself was in state of siege. At the end the population of the village Khrakh Uba was thrown out from their native land by police force. The same happened in Uryan Uba. Maybe this was an act to strengthen friendly relations between our countries?

Why do such crying events happen?

Such actions would have been impossible if the governing bodies of Azerbaijan hadn’t spread their influence on the Russian officials. Baku rules the situation in Dagestan and also interferes in career settings. It turned out that among all countries namely in Russia (especially in Dagestan) the diplomacy of Azerbaijan works more effectively.

It is very unpleasant that the deputies of National Assembly and our career corpus in Dagestan don’t say anything about all that. They haven’t even reacted to the last events connected with the demarcation of borders and the loss of 2.5 thousand hectare of land in Dokuzpara region of Dagestan. None of them is interested in all these happening events.

Now conferences on the demarcation of the borders of Azerbaijan begin. One of them has been lately in Moscow. From the border areas of Dagestan only the head of Dokuzpara Kerimkhan Abbasov took part in it. He was the only one from Russian delegation who defended the territorial integrity of the country. Repeatedly he asked I. Bratchikov (the ambassador of especial commissions of Ministry of External Affairs of Russia) to include him into the commission of demarcation and only after that he was included into the commission. And from the Azerbaijani side the heads of all eight border areas came to Moscow. The head of Russian delegation in the combined Russia-Azerbaijani demarcation commission, the head of the 4th department of UIS MIA Russia Vadim Postnov said that everything had already been decided.

But who has decided these questions? When the delimitation commission was making the borders of Dokuzpara region with neighboring regions of Azerbaijan there was no representative of that region. Why do the Russian officials deprive their citizens of agricultural lands – the most economical base of this region?

Let’s call everything by its name: Baku lobby almost rules the whole Dagestan, and they are ready to put the South Dagestan into their pockets. We should free ourselves from such an expansion.

What is the position of Lezghins society to these events? What should be done in order to change the situation in this sphere?

We haven’t forgotten, never will submit and will fight with the results of the degrading contract about borders which was signed between Russia and Azerbaijan during the time of ruling of Medvedev.

Azerbaijan was presented huge area; it got Samur water which is almost formed in the territory of Dagestan. But except land and water Azerbaijan also, for the first time in its history, got an international acknowledgment of borders. None of other neighbor countries have ever done it.

The results of this predatory for Lezghins contract have not showed themselves fully. They will be shown more and more forming hatred of the simple people to all those who were participle in this robbery.

The region is becoming unstable and it is difficult to forecast what it will look like. We should be ready for it. That’s why we should fight against the politics of concessions from the officials. Nothing will change without our persistent requests. Our solidarity should increase.

It turns out that it is difficult to solve the Lezghins problems on the level of Azerbaijan and it is necessary to use the help of international organizations?

Yes, that’s why FLNCA began to cooperate with international public organizations, makes connections with the UN and the European Parliament. Our several visits to Europe showed the Lezghins problem in Azerbaijan to the world community.

Together with the Organization of Unrecognized Nations we gave an alternative talk on the Republic of Azerbaijan which was accepted one of the sessions of the UN instead of the talk of Azerbaijan.

We realize that we should continue to wide our cooperation with international organizations. We are going to study how ethnic minorities realize their right on self organization, to get necessary experience of those who got territorial autonomy. It is very necessary for us.

Leaning on the international law and international organizations we want to fight against the discrimination. In Azerbaijan we are going to obtain the rights the ethnic minorities have in Europe.

We should do everything in order to show the Lezghins problem to the world community.