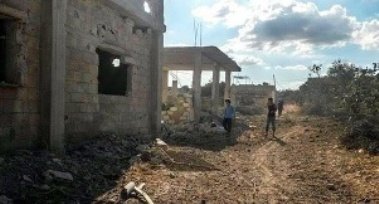 Residents of the Syrian village of Deir Foale, founded by immigrants from Dagestan, have found themselves in an air strike area. This was reported by the villagers. According to unconfirmed information, two Circassian villages were also affected by air strikes.

The "Caucasian Knot" has reported that in the course of the armed conflict in Syria, places of residences of Circassians are subjected to bombing and shelling. Starting from September 30, the Russian air forces are also involved in air strikes on targets in Syria.

On September 30, on her Facebook page, Fatima Tlisova, the Radio Liberty correspondent, reported with reference to a source in the village of Aseleh on the Russian air strike on three villages of the Caucasian Diaspora: a Dagestani village of Deir Foale and Circassian villages of Aseleh and Abu Hamam. According to Fatima Tlisova, the air strike resulted in numerous civilian casualties. Later, the journalist has specified that the above information is confirmed only with regard to the village of Deir Foale and that there are still no confirmations concerning the Circassian villages.

Residents of the village of Deir Foale have also confirmed to the "Caucasian Knot" correspondent the information about the air strike. In particular, Ayham Dagestani, a Syrian of the Dagestani origin, has reported on the casualties in all three villages.