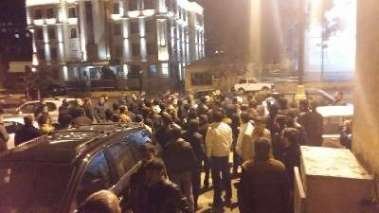 Late in the evening of November 5 in the settlement Mashtaga police detained the deputy chairman of the association Muslim Unity Elchin Gasimli and delivered him to the Sabunchu district police.

The faithful activists of the public association outraged by this gathered in front of the police. This led to confrontation and the rapid reaction police force was sent to the scene. During the clashes up to 20 religious activists were detained. The roads to the building were blocked by police.

The leader of this association, theologian Taleh Bagirzadeh strongly condemned the incident, threatening that if they violated the rights of Elchin Gasimli, those responsible for this would answer for their actions. "We demand the immediate and unconditional release of Elchin Gasimli. It is better to die with honor than to live under oppression and humiliation!" said Bagirzadeh.

Late in the evening the police chief of Baku Mirgafar Seyidov arrived at the place.

An official response to the incident or comment on this matter has not yet been received.

Recall that the previous day Taleh Bagirzadeh was severely beaten in the Yasamal District Police. He was accused of carrying out a march to the Alley of Martyrs and demanded to refuse of the idea.