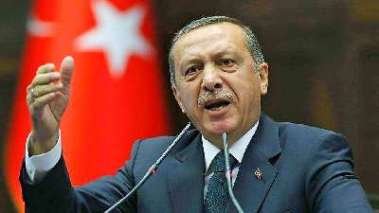 President Erdogan sharply criticized Moscow's policy towards its neighbors and the military operation in Syria. According to Turkish media, the day before, late in the evening, Erdogan  commented on the attack militants LIH on the base of the Turkish army in Iraqi Ba`shiqah point.

Erdogan accused Russia and Iran in an attempt to squeeze out of the Turkish military in Iraq, noting that the Iraqi authorities themselves  asked to organize the training of military personnel, and a training camp was chosen by the Iraqis. However, Iran and Russia have tried to present  the presence of Turkish troops in Iraq as illegal. "We operate in Iraq under international law," he said.

Referring to Russia's policy in Syria, Erdogan  sharply criticizes Moscow. They say  that  the Syrian government called  Russia to Syria, but this government  is "illegitimate." And now, you can send troops anywhere? "Then why did you invade Georgia?  Did they call you? What do  you need in Ukraine,  did they also called you?" said Erdogan.

"In Syria, Russia is fighting  not against LIH, on the contrary, they bomb the moderate opposition and our compatriots - Turkmen. Russia wants to deceive the whole world by means of disinformation," said Erdogan.