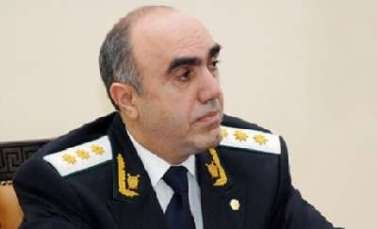 On the criminal case against Taleh Bagirov (Bagirzadeh) and other members of the Muslim Unity Movement 57 people have been arrested in Baku and the surrounding areas and another 11 have been arrested in Gandja and other regions. This was announced by Prosecutor General Zakir Garalov at the expanded Board meeting of the Prosecutor's Office on the results of 2015 on February 5.

According to him, in the course of large-scale investigative and operational activities, a large quantity of firearms, ammunition and religious literature of radical content was seized from the Muslim Unity members.

Bagirzadeh was detained during a special operation in the village of Nardaran on 26 November as a result of which 6 people were killed, including two policemen.

The investigation is also continued into the criminal cases on the fires on the Gunashli offshore oilfield platform and in a high-rise building in the Binagadi district, which resulted in numerous casualties.

Intensive investigations are also continued into the case of a gang of 17 people headed by a Nuraddin Khalilov, who declared himself the Emir of the Gabala region.

Twenty-two people are involved in the criminal case in connection with the crimes in the former Ministry of National Security. Twenty of them have been arrested, one is at large and one is under house arrest. There are 130 episodes in the case and 65 people are recognized as victims.

Twelve criminal cases have been started on the facts of "artificially high prices” after the devaluation of the manat.

Interior Ministry and Prosecutor’s Office: they want to create an Islamic state in Nardaran