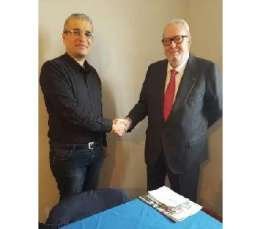 on an official visit to Baku, President of PACE Pedro Agramunt , who is in Baku with an official visit, paid a visit to jail N2  Ilgar Mammadov,  the convicted leader of the "Republican Alternative"  Movement . Agramunt wrote about it his microblog on Twitter, posting photos from the meeting: "Today I met with the  convicted Ilgar Mammadov. We continue to work to solve  his case," he wrote.

* Ilgar Mammadov and Tofig Yagublu were sentenced to seven and five years in prison on charges of organizing riots in Ismayilli on 23-24 January 2013. Both political figures denied his guilt.  The European Court of Human Rights (ECHR) in May 2014 found a violation of the rights of Ilgar Mammadov of Article 5 (right to liberty and security), Article 6 (the right to the presumption of innocence) and Article 18 (limits the use of restrictions on rights.)