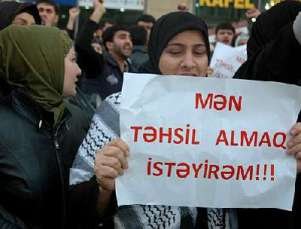 On December 19 Baku Court of Appeal , chaired by Hasan Akhmedov upheld an appeal of eight so-called "prisoners of conscience." In the appeal believers asked to eliminate the verdict of the first instance, and to release them from prison.
These individuals were arrested for participating in a protest October 5, 2012 the Ministry of Education demanding the abolition of the ban on headscarves in schools pupils .

They were charged under Articles 315.2 (resisting police with violence) and 233 ( breach of public order.)

Court of Appeals upheld the verdict of the court of first instance.

Relatives of the accused cursed the decision of the court. For these events were convicted two more groups of believers.

Protesters against ban on hijabs convicted in Baku