Azerbaijan Official Calls On Mullahs To Perform Prayers In Azeri 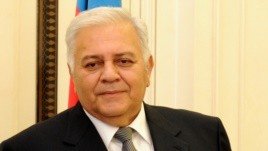 BAKU -- Azerbaijani parliament speaker Oqtay Asadov has called on religious clerics in the country to perform their prayers in Azeri, not in Arabic.

Speaking during a parliamentary session on February 3, Asadov said that since all the verses of the Koran have been fully translated into Azeri, it would be better if all the prayers during sermons or events linked to religious services were performed in Azeri to make it easier for people to fully understand the prayer.

But, according to Islamic regulations, all prayers must start with Koranic verses in Arabic -- which even in that language have different interpretations -- and afterward continue in a native language.