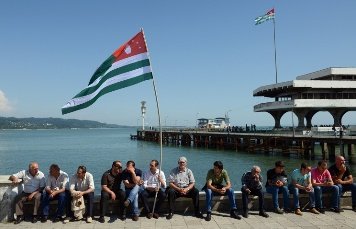 The establishment of the Provisional Council was announced at a meeting of opposition supporters by Adzinba. Participants in the meeting separately voted in favour of establishing such a body and then for those who are included in the Council. Those present at the meeting were addressed by Khadzhimba who called on them "not to take any actions without directions from the Opposition leadership.

"I heard that apprehensions were expressed today (Thursday) that attacks on some institutions might be launched. Noone should do anything and and take any steps without our directions," the Opposition leader said. Khadzhimba urged his supporters to stay calm.

On Thursday evening, the Parliament of Abkhazia passed a resolution, in which it addressed the country's president in a suggestion that he resign his powers ahead of schedule. The MPs also delivered a vote of no-confidence in the republic's Prime Minister Leonid Lakerbaya.

Twenty members of parliament voted for the adoption of the resolution and one parliamentarian abstained. Fourteen members did not attend the parliament meeting.

The resolution passed by the parliament said that the decisions were made "in view of the tense socio-political situation that developed in the country and for the purposes of keeping national accord and stability in the state".