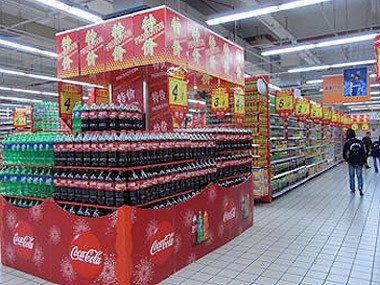 The largest chain of supermarkets in Baku stopped its cooperation with Coca-Cola and refuses to sell its products because of the fact that the representation of the company in Azerbaijan had released a large batch of drinks on the banks of which the logo of the Azerbaijani youth movement NIDA was posted, Azerbaijani news portal "Haqqin.az" reports.

According to the article the company is currently in active negotiations in order to return its products to markets. With this purpose a few high-ranking representatives of the head office of the company arrived in Azerbaijan.

Earlier the Azerbaijani media reported that Coca-Cola Azerbaijan launches a batch of drinks, on the banks of which the NIDA logo will appear. At the same time the company itself refutes this information, and the photos posted on social networks are considered as fake.

Note that the youth activists of NIDA are accused of preparing riots at Fountain Square of Baku on March 10. They are also charged with illegal possession of weapons, drugs and hooliganism. Amnesty International human rights organization recognized all of them as "prisoners of conscience". On May 6, the defendants were sentenced to 6-8 years of imprisonment.

The U.S. embassy to Azerbaijan, the U.S. Helsinki Commission , UK Minister for Europe, Amnesty International, Human Rights Watch and Freedom House human rights organizations have condemned the arrest of Azerbaijani youth activists of NIDA, given the forthcoming chairmanship of Azerbaijan in the Committee of Ministers of the Council of Europe.