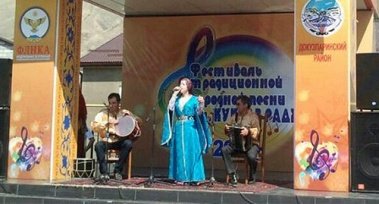 On August 23, the village of Usukhchai of the Dokuzpara District of Dagestan hosted the first festival of traditional folk songs dedicated to Kukvaz Radjab. The event organizers plan to make it a tradition.

The festival was organized by the "Federal Lezgin National and Cultural Autonomy" (FLNCA) and the administration of the Dokuzpara District. The "Caucasian Knot" correspondent was told by Abidat Eyubova, a FLNCA member and a curator of the festival, Kukvaz Radjab was a people's favourite singer and he made a great contribution to the preservation of Lezgin folk culture.

According to the organizers, the main objective of the festival-contest was to "restore and preserve vanishing people's own age-old traditions of music, song, and dance."

The contest involved 34 persons, who came from all parts of southern Dagestan and northern Azerbaijan. The contest participants were competing in two categories singing and playing a national musical instrument. They were to perform only folk songs or songs created by Kukvaz Radjab.

According to Abidat Eyubova, the organizers made a decision to invite to the festival participants from Azerbaijan, since a lot of Lezgins live there. Besides, according to her, "one of the objectives of the festival was to make an attempt to preserve the cultural link between members of the same people divided by the border between the two states.