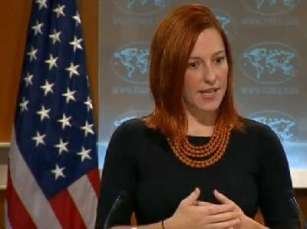 QUESTION: There is a US citizen, Said Nuri, who has been detained in Azerbaijan. He has been prohibited from leaving the country. I wanted to find out if the State Department has expressed any type of protest to the ambassador over this detention.

MS. PSAKI: Embassy and Department officials have been in touch with Azerbaijani authorities in Baku and Washington about this matter and will continue to do so. Our understanding is that the general prosecutor's office, for those of you who did not see this report, barred Mr. Nuri from leaving the country. We call on Azerbaijani authorities to provide Mr. Nuri a full explanation and are monitoring the case closely. We've been in regular contact with him as well and are providing all consular - possible consular services. Our consular officer actually met with him on September 5th, so just a couple of days ago.

Note that a former resident of Azerbaijan, Said Nuri became an American citizen. He was detained at the airport in Baku last week when departing to the United States.

The Prosecutor's Office of Azerbaijan motivated it by the presence of a criminal case, in which Nuri is a witness. The case and Nuri’s involvement in it remains unknown.