Rally in Support of Azerbaijani Political Prisoners in Ukraine 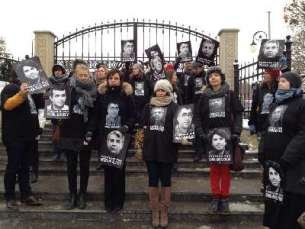 In the course of opening a representative office of the Norwegian Foundation Human Rights House in Chernigov, Ukraine yesterday, a rally of solidarity with the Azerbaijani human rights activists was held.

In the hall were hung T-shirts with images of Intigam Aliyev, Rasul Jafarov, Anar Mammadli and Leyla Yunus.

In addition, a photo of the local human rights defender Malahat Nasibova was set on the stand dedicated to human rights violations in Nakhchivan.

In Azerbaijan, Human Rights House was opened in 2009, but two years later, the authorities closed the office and canceled the registration of the entity.