Presidents of Bulgaria and Azerbaijan discuss the Southern Gas Corridor 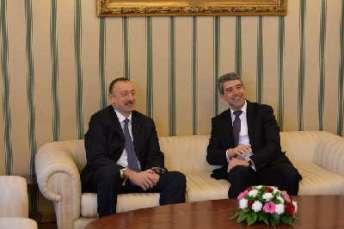 The President of Azerbaijan met with the head of Bulgaria Rosen Plevneliev on March 4 in Sofia during the visit. Initially, the presidents had one-on-one  conversation, and then with the participation of delegations. The sides expressed satisfaction with development of bilateral relations in political, economic, energy, humanitarian, cultural and other fields.

It was stressed that there are great prospects and good opportunities for expanding cooperation.

After the meeting, the heads of state signed the "Joint Declaration on Strategic Partnership between the Republic of Azerbaijan and the Republic of Bulgaria." Aliyev also met with Bulgarian Prime Minister Boyko Borisov. The central theme was the project of the Southern Gas Corridor. The sides expressed satisfaction with the cooperation in this matter, the website of Ilham Aliyev.

The Azerbaijani delegation included also the Foreign Minister, the Minister of Communications, and other senior executives of the country.