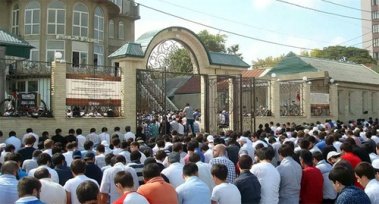 Arms were planted on Kurban Askandarov, Deputy Imam of a Makhachkala mosque, his mother Malikat wrote in her application filed today to the Human Rights Centre (HRC) "Memorial". The "Caucasian Knot" has reported that Askandarov's detention on May 27 was announced by the congregation of the mosque located in Kotrov Street in Makhachkala, where he served as Deputy Imam. Today, Malikat Askandarova has submitted her application to the HRC "Memorial" asking to intervene in the situation. She is confident that the case against her son was fabricated, and the firearms were planted on him. "I'm sure that they fabricate a criminal case against my son: they planted firearms on him, because he is Deputy Imam at the mosque in Kotrov Street," says her application. Law enforcement officials have refused to give reasons for Askandarov's detention to the "Caucasian Knot" correspondent. No official charges have been brought against the detainee, said a police source.

Dagestan: rally in support of prosecutor Magomed Orudjev was 100 strong